The second part of this guide will focus on making two abstract classes to better handle certain aspects of our game. The first will involve creating a class that will better handle image drawing and holding related bitmap data (such as position, rotation, reflection, etc.). The second will use our improved sprites to create a standardized game window that will contain elements such as text, sprites, and selectable choices.

The reason this section is called thinking abstractly is because it will focus intently on elements of polymorphism and inheritance through the use of abstract classes.

To refresh your memory, an abstract class uses the abstract keyword and cannot have instances made of it. Simply put, it acts as a parent class perfect to hold the messier, often untouched variables used by it's child classes. 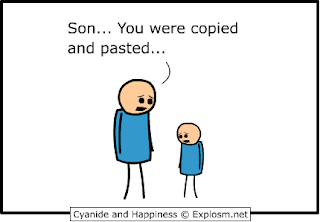 Every line would be that repetitive. The less code we have to write, the better. So the first part of Abstraction will focus on creating a set of classes to let us instead say;
The second part will focus on making a standardized game window, which is just a background with borders and organized elements. While every game does this visual aspect differently, It's inclusion is videogames is so ubiquitous it honestly deserves it's own focus. If you don't believe me, just see for your self. Menus, text boxes and selectable choices are so common in video games, and they're all composed of related objects. As such, it makes perfect sense to tackle them early on. By the end of this chapter, you should have the perfect framework to make and menu system or options screen your game would need (boring, yeah, but it'll make those parts of the game seem like a piece of cake).
Posted by Samuel at 7:02 PM