At this point, 2D game development should feel like an arts and crafts project (and if it doesn't, it's because you have no imagination and should probably pursue a career as an accountant you sad, boring person). You have a 2D canvas with cartesian coordinates to draw images across. You just have to lay out the rules of how they should be rendered.


By making a spritesheet class, we are specifying an image that contains multiple graphics, but should be cut up and only have one specific "tile" of the spritesheet drawn at a time. Videogame spritesheets are good for holding a single image with multiple animations in one specific file. It's more economical to hold more images in one solid file rather than to have multiple files each holding a single image, especially if the images in the file are all related (like corresponding frames to a character animation).

It should be noted not all videogame sprites operate the same way. Sometimes the media is limited on internal data storage, and it becomes more efficient to just specify the exact values of where to "cut" out each sprite in the code. The method I am suggested makes for very neat code, but would not pass for quality development on older forms of data storage. Thankfully, we're developing a game for windows in the year 2011, so we've already thrown most professional programming habits out of the moving vehicle. In it's stead, we will be left with very clean looking code.

Consider the following; the walking animation of Mega Man is composed of ten frames. Each frame is (overall) a different total width and height. By specifying a maximum size, we may ensure that whatever other sized animation frames fit into the source rectangle, but all that surrounding area is moot data. Truthfully, it's not a bad tradeoff. But if we were concerned with data storage, just specifying the coordinates of each next frame wouldn't hurt (it would just suck and would require tables of rectangle data. Not fun).
The idea behind our animated spritesheet is as follows:

So first off, just what do we mean by an x and y index? 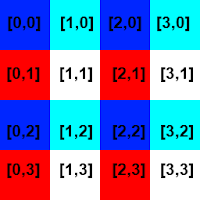 
It's a bit more code than we're used to, but it works rather well. With this, we can specify spritesheets of equidistant rectangular tiles, and draw only one tile at a time. While this makes it  perfect for things such as sprite animations, it's not the best for drawing entire maps from select tiles (as each drawn tile has a reference to the entire Texture2D spritesheet).
The more game related things we begin to focus on, the more broad these topics tend to become, and the more things will begin to depend on how you want you're game designed. I'm sure some reader can think of a dozen improvements to my sprite_set class. But in terms of a general skeleton, I like what this provides.


Homework: create two methods that increment the x and y indices respectfully. If the indices reach their maximum, it sets the respective index value to 0. These will be useful for creating simple animation update calls (Sprite_Set.Increment_Y();)